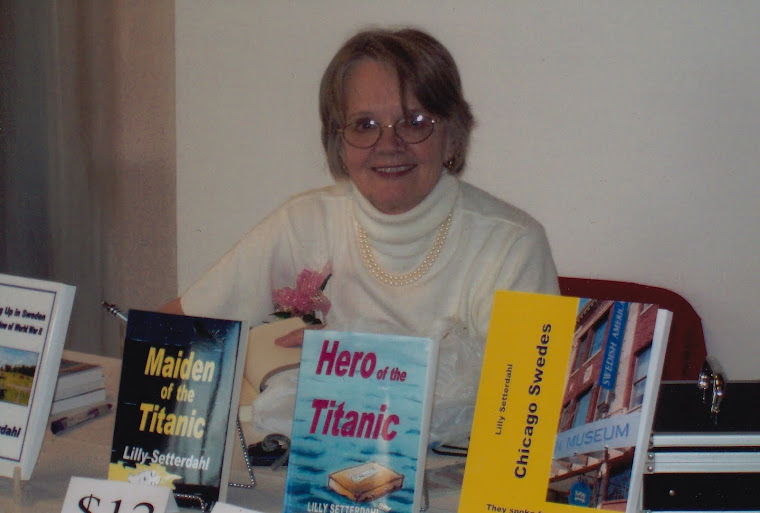 Signing books at launch of Hero of the Titanic in 2011

According to Worldcat.org this author has 55 works in 75 publications in 2 languages and 406 libraries.
www.amazon.com/Lilly-Setterdahl/eB001K8FWG

New manuscript for a thriller

Toby, a geologist in Gothenburg, Sweden, drives home from work on a dark October night when, unexpectedly, the traffic lights stop working and the city turns dark. When his brother, Aaron, who works for the Utility Company, drives up outside his apartment, Toby is already there asking questions, but Aaron can’t see any mechanical reason for the power outage. More people join in the discussion, and one man catches everyone’s attention when he says, “Listen to me. I’m a computer specialist guarding against hackers. This is a cyberattack on Sweden and Finland. We’ve received warnings and now it has happened. Be prepared to be without power for a very long time.”

A new manuscript for a novel

Elisabeth and the Nobleman, a novella

This romantic saga filled with drama takes the reader to a small city in Sweden and a castle farm harboring ghosts and a legend about trolls, a university town, and to Stockholm. It plays out in the 1960s, a decade of women’s liberation, the emergence of sexual freedom, miniskirts, long hair, and rock-n-roll, but before the appearance of cellphones, the Internet, and the influx of immigrants.

Bishop Hill Reframed: Voices from the past

to be published in the spring 2021 by Bishop Hill Heritage Association.
https://www.amazon.com/Lilly-Setterdahl/e/B001K8FWDG

Note that the book Swedish-American Portraits, 1972-1994: Photographed by Lennart Setterdahl and reviewed in Nordstjernan Sep. 15 2020 is available on eBay for now.

It can also be purchased from the author directly. Please message me on facebook.

REVIEW: “Swedish-American Portraits 1972-1994: Photographed by Lennart Setterdahl",
by Lilly Setterdahl and Stephen Setterdahl. 2020.
Swedish migration researcher Lennart Setterdahl (1928-1995) arrived in USA in 1959
and found a Swedish-American immigrant community in transition. He became deeply
interested in that remarkable population group, and as early as 1962 began documenting it with camera and tape recorder. The results became an highly valuable source for future researchers. Lennart rescued nearly 1,855 church archives, and perhaps 1,000 organizational archives, 140 newspaper archives, and made 3,000 tape recorded interviews of immigrants, both well-known and less-known, along with their descendants. It got devoted support of the whole Setterdahl family, wife and author Lilly, and their three sons Stephan, Christer and Michael. Lilly’s editorial work with Lennart led to her own remarkable writing career, beginning in the mid-1970’s as author of many books on Swedish America, plus later fiction works of high quality. Sweden’s Emigrant Institute in Växjö became Lennart’s primary sponsor from 1969. In 1990 Lennart was awarded an honorary doctorate by Gothenburg University in Sweden in recognition of his devoted work.

Lennart died in 1995, but his work remains an important research source. His author-wife Lilly and son Stephan, (designer and photo editor) together published in 2020 Swedish-American Portraits 1972-1994: Photographed by Lennart Setterdahl, with 262 of Lennart’s remarkable photos from 20 different states, accompanied by segments of those interviews.
Both this impressive new illustrated book, and Lilly ́s welcome background story of the
Setterdahl family’s pathbreaking research, Documenting America ́s Swedish Immigrants:
Lennart Setterdahl ́s Life and Work, complement each other. They are fascinating reading, and
are available by contacting Lilly at email address: lillysetterdahl@gmail.com.
John E. Norton, ed., Augustana Historical Society Newsletter, Augustana College

http://www.amazon.com/Lilly-Setterdah/e/B001K8FWDG
Posted by Lilly S at 8:25 PM No comments:

Featured book: Swedish-American Portraits 1972-1994: Photographed by Lennart Setterdahl. Released on August 1, 2020.
Text: Lilly Setterdahl
Design: Stephan Setterdahl
High-quality hardback coffee table book, 10x12 inch. Price $29.95. Contains 262 unique images and descriptive texts.
The black and white portraits in this book show Swedish Americans as they appeared in daily life at the time they were interviewed. Their faces give a candid, honest, and genuine glimpse of hardworking individuals, most of them at retirement age. The photos were taken in 20 different states, with Minnesota, Illinois, and Nebraska having the largest representation. The landscapes and small post-office buildings show a disappearing small-town America.
The author has 54 works in 73 publications in 2 languages deposited in 407 libraries to her credit. This is her 19th nonfiction book about Swedish America. She is also a novelist.
Other books by the same author will be available at the signing, as for instance, Documenting America's Swedish Immigrants, which describes Lennart and Lilly Setterdahl's travels across the United States and into Canada to preserve documents and memories of the Swedish ethnic group.
See www.bishophillheritage.org for programs in the village park on the same date as the signing. Outdoor dining is available. The boutiques and the museums are open.
www.amazon.com/Lilly-Setterdahl/e/B001K8FWDG
Posted by Lilly S at 8:22 PM No comments:

According to Worldcat.org this author has 55 works in 75 publications in 2 languages and 406 libraries.  www.amazon.com/Lilly-Setterdahl/eB0... 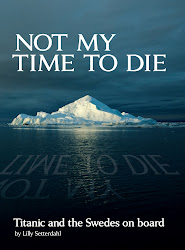 A book about the Titanic and the Swedes on board

Maiden of the Titanic 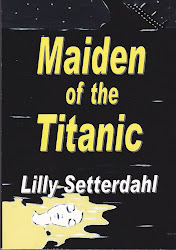 Hero of the Titanic 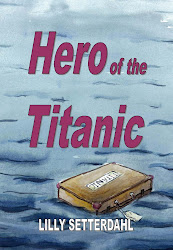 Chicago Swedes: They spoke from the heart 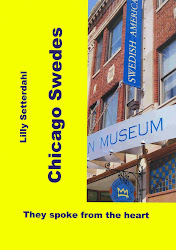